Tests failing because of problems with Tk:

Currently (Nov 2015) Julia graphics libs seem to be in a mess. I had a really bad time just getting basic dependencies installed and running. As far as I can tell this isn't my library's fault. Sorry!

Also, you need to use the development version of the Tk package to avoid deprecation errors (Pkg.clone("git@github.com:JuliaLang/Tk.jl.git") or similar).

In other words: simple, imperative vector graphics; a wrapper around Cairo; an interface similar to Processing. For a declarative approach, see Compose.jl. For more control and complexity, use Cairo.jl directly.

In providing a simple API, the package has two important aims:

which displays this window: 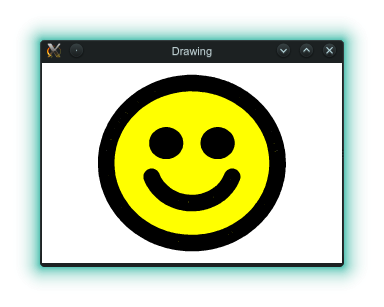 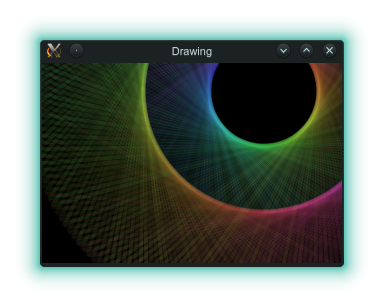 The API consists of:

These can be seen in the example below, which has three scopes, nested two deep, and includes the attributes Ink(), Pen(), etc.

The default coordinate system is from 0 to 1 (on the shorter axis, origin bottom left), with 10% of the space used as a border on each side. Unlike "raw" cairo, the "current point" is preserved across strokes.

There are some constraints on how scopes are used: the with() scope cannot contain actions; the draw(), paint() and cairo() scopes cannot contain nested scopes.

There are two kinds of attribute: initial and dynamic.

The order of initial attributes is not important, but they can only appear in the outermost scope. The order of dynamic attributes may be important (eg the relative order of Scale() and Translate()) and follows the order given in the scope, from left to right.

The scale can also be a tuple, (nx, ny). In that case, the scale is chosen so that both those scales fit within the plotting area (but pixels remain square).

Below are plotted unit axes (x is horizontal) for 100x140 pixel images, with a border of 0.1 (ie 10 pixels), where the landscape axes extend to negative values. Note that drawing is not clipped to the unit axes area - it can extend over the whole page.

Note: pen width is in user units, but does not change if Scale() is used afterwards.

To clarify the align parameter, here are some text paths, align to the nearest orange cross. 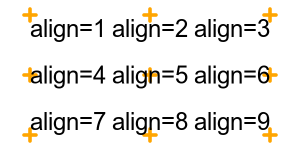