Lattice reduction and other lattice tools in Julia

LLLplus includes Lenstra-Lenstra-Lovász (LLL), Brun, and Seysen lattice reduction; and shortest vector problem (SVP) and closest vector problem (CVP) solvers. These lattice reduction and related lattice tools are used in cryptography, digital communication, and integer programming. The historical and practical prominence of the LLL technique in lattice tools is the reason for its use in the name "LLLplus". This package is experimental; see fplll for a robust tool.

LLL [1] lattice reduction is a powerful tool that is widely used in cryptanalysis, in cryptographic system design, in digital communications, and to solve other integer problems. LLL reduction is often used as an approximate solution to the SVP. We also include Gauss/Lagrange, Brun [2] and Seysen [3] lattice reduction techniques. The LLL, Brun, and Seysen algorithms are based on [4]. The CVP solver is based on [5] and can handle lattices and bounded integer constellations. A slow SVP solver based on the CVP tool is included as well.

We also include code to do a Vertical-Bell Laboratories Layered Space-Time (V-BLAST) [6] matrix decomposition which is used in digital communications. The CVP, LLL, Brun, Seysen, and V-BLAST functions can be used to solve (exactly or approximately) CVP problems; the MUMIMO.jl package demostrates how these functions can be used in decoding multi-antenna signals.

Another important application is in cryptanalysis; as an demo of a cryptanalytic attack, see the subsetsum function. The LLL algorithm has been shown to solve many integer programming feasibility problems; see integerfeasibility for a demo. Lattice tools are often used to study and solve Diophantine problems; for example in "simultaneous diophantine approximation" a vector of real numbers are approximated by rationals with a common deonminator. For a demo function, see rationalapprox. Finally, to see how the LLL can be used to find spigot formulas for irrationals, see spigotBBP.

Each function contains documentation and examples available via Julia's built-in documentation system, for example with ?lll. Documentation for all functions is available on pkg.julialang.org. A tutorial notebook is found in the docs directory or on nbviewer.

Here are a few examples of using the functions in the package on random lattices.

In the first test we compare the lll function from LLLplus, the l2avx function in the src\l2.jl file in LLLplus, the lll_with_transform function from Nemo (which uses FLINT), and the lll_reduction function from fplll. Nemo and fplll are written by number theorists and are good benchmarks against which to compare. We first show how the execution time varies as the basis (matrix) size varies over [4 8 16 32 64]. For each matrix size, 20 random bases are generated using fplll's gen_qary function with depth of 25 bits, with the average execution time shown; the eltype is Int64 except for NEMO, which uses GMP (its own BigInt); in all cases the δ=.99. The vertical axis shows execution time on a logarithmic scale; the x-axis is also logarithmic. The generally linear nature of the LLL curves supports the polynomial-time nature of the algorithm. The LLLplus.lll function is slower, while l2avx is similar to fplll. Though not shown, using bases from gen_qary with bit depth of 45 gives fplll a larger advantage. This figure was generated using code in test/timeLLLs.jl. One question that could arise when looking at the plot above is what the quality of the basis is. In the next plot we show execution time vs the norm of the first vector in the reduced basis, this first vector is typically the smallest; its norm is an rough indication of the quality of the reduced basis. We show results averaged over 20 random bases from gen_qary with depth 25 bits, this time with the dimension fixed at 32. The curve is created by varying the δ parameter from .29 to .99 in steps of .2; the larger times and smaller norms correspond to the largest δ values. Though the l2avx function is competitive with fplll in this case, in many other cases the fplll code is significantly faster. Finally, we show execution time for several built-in datatypes (Int32, Int64, Int128, Float32, Float64, BitInt, and BigFloat) as well as type from external packages (Float128 from Quadmath.jl and Double64 from DoubleFloat.jl) which are used to generate 40 128x128 matrices, over which execution time for the lattice reduction techniques is averaged. The vertical axis is a logarithmic representation of execution time as in the previous figure. This figure was generated using code in test/perftest.jl. 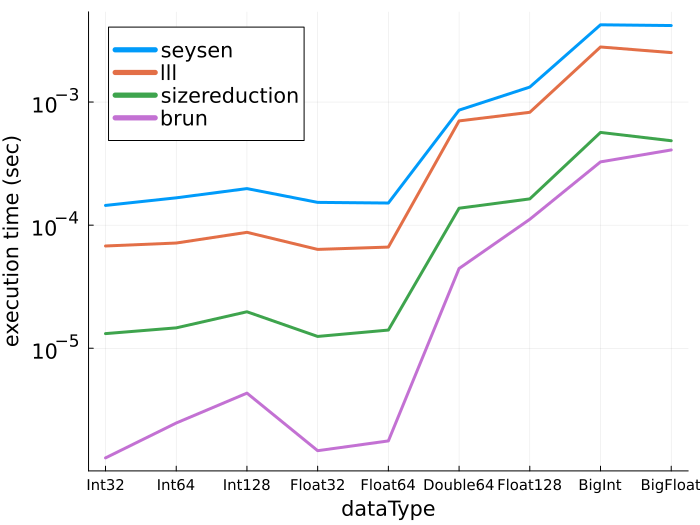 There are certainly many improvements and additions that could be made to LLLplus, such as adding Block-Korkin-Zolotarev (BKZ) lattice reduction with improvements as in [8]. Even so, it would be hard to compete with fplll on features. In fact, a Julia wrapper around fplll would be the most useful addition to lattice tools in Julia; it would provide funcionality not in LLLplus such as BKZ reduction.

The algorithm pseudocode in the monograph [7] and the survey paper [4] were very helpful in writing the lattice reduction tools in LLLplus and are a good resource for further study. If you are trying to break one of the Lattice Challenge records or are looking for robust, well-proven lattice tools, look at fplll. Also, for many number-theoretic problems the Nemo.jl package is appropriate; it uses the FLINT C library to do LLL reduction on Nemo-specific data types. Finally, no number theorists have worked on LLLplus; please treat the package as experimental.

[3] M. Seysen, "Simultaneous reduction of a lattice basis and its reciprocal basis" Combinatorica, 1993.