generation of Sobol low-discrepancy sequence (LDS) for the Julia language

The Sobol module for Julia

This module provides a free Julia-language Sobol low-discrepancy-sequence (LDS) implementation. This generates "quasi-random" sequences of points in N dimensions which are equally distributed over an N-dimensional hypercube.

The advantage of an LDS over truly random (or pseudo-random) numbers is that an LDS (which is not random) tends to be more evenly distributed for finite numbers of points. This is used in quasi-Monte Carlo methods in order to accelerate convergence compared to traditional Monte Carlo methods employing random sequences.

It can be installed using the Julia package manager via Pkg.add("Sobol").

This is an independent implementation, originally by Steven G. Johnson, of the algorithm for generation of Sobol sequences in up to 21201 dimensions described in:

Originally implemented in C in 2007 as part of the NLopt library for nonlinear optimization, the code was subsequently converted by Ken-B into pure Julia with roughly the same performance.

It is important to emphasize that SGJ's implementation was based on the mathematical description of the algorithms only, and was done without reference to the Fortran code from the Trans. Math. Soft. (TOMS) papers. The reason is that TOMS code is not free/open-source software (it falls under restrictive ACM copyright terms). (SGJ did re-use a table of primitive polynomials and coefficients from the TOMS code, but since this is merely a tabulation of mathematical facts it is not copyrightable.) SGJ's implementation in NLopt, along with this Julia translation, is free/open-source software under the MIT ("expat") license.

Direction numbers used were derived from the file http://web.maths.unsw.edu.au/~fkuo/sobol/new-joe-kuo-6.21201

Technically, we implement a 32-bit Sobol sequence. After 232-1 points, the sequence terminates, and subsequently our implementation returns pseudo-random numbers generated by the Mersenne Twister algorithm. In practical applications, however, this point is rarely reached.

returns the next point (a Vector{Float64}) in the sequence; each point lies in the hypercube [0,1]N. You can also compute the next point in-place with

where x should be a Vector of length N of some floating-point type (e.g. Float64, Float32, or BigFloat).

You can also use a SobolSeq as an iterator in Julia:

Note, however, that the loop will never terminate unless you explicitly call break (or similar) in the loop body at some point of your choosing.

We also provide a different SobolSeq constructor to provide an N-dimensional Sobol sequence rescaled to an arbitrary hypercube:

where lb and ub are arrays (or other iterables) of length N, giving the lower and upper bounds of the hypercube, respectively. For example, SobolSeq([-1,0,0],[1,3,2]) generates points in the box [-1,1]×[0,3]×[0,2]. (Although the generated points are Float64 by default, in general the precision is determined by that of lb and ub.)

If you know in advance the number n of points that you plan to generate, some authors suggest that better uniformity can be attained by first skipping the initial portion of the LDS. In particular, we skip 2ᵐ−1 for the largest m where 2ᵐ-1 ≤ n (see Joe and Kuo, 2003 for a similar suggestion). This facility is provided by:

skip returns s, so you can simply do s = skip(SobolSeq(N)) or similar.

Here is a simple example, generating 1024 points in two dimensions and plotting them with the PyPlot package. Note the highly uniform, nonrandom distribution of points in the [0,1]×[0,1] unit square! 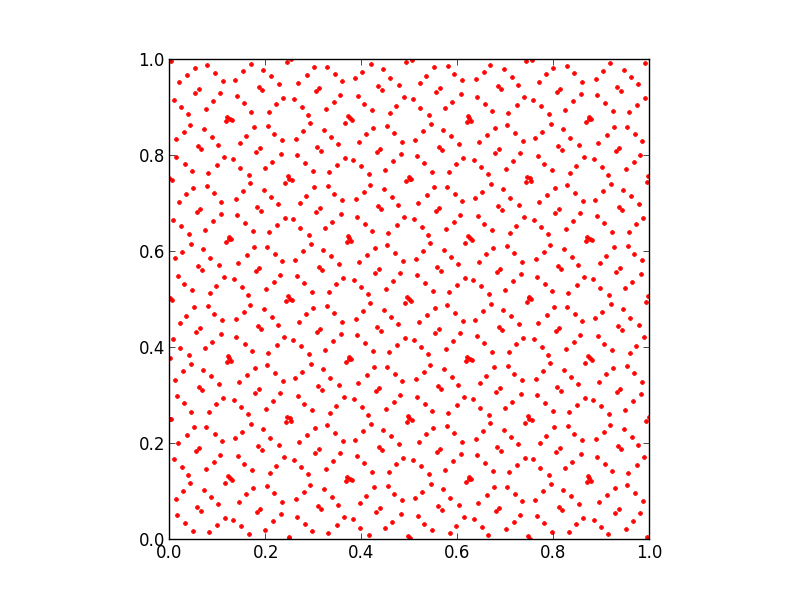 This module was written by Steven G. Johnson.